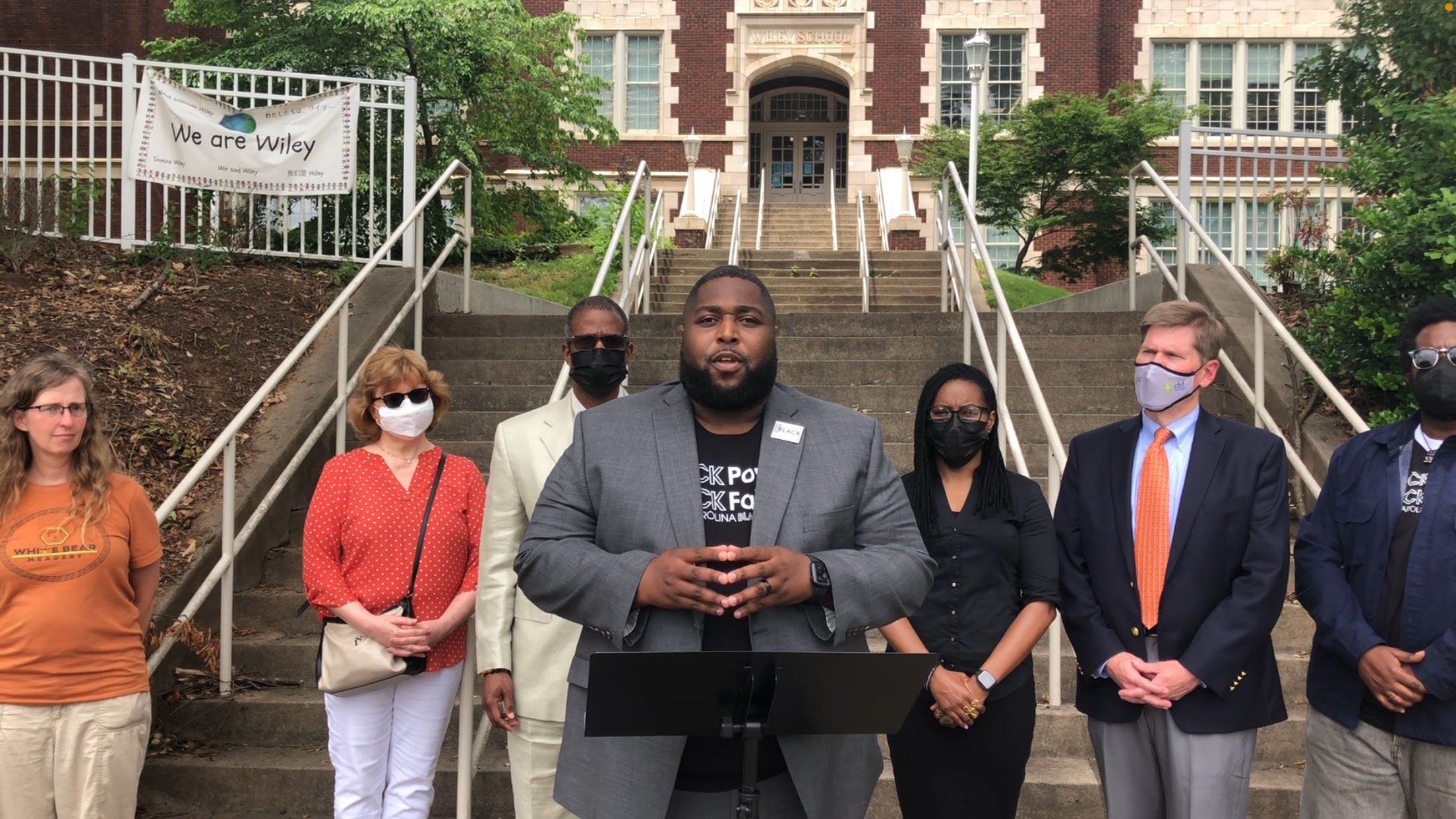 Today marks the grim anniversary of the 2015 mass shooting at Emmanual African Methodist Episcopal Church in Charleston, SC which took the lives of nine Black worshippers, including state senator Clementa C. Pinkney. Over the past few weeks, we have been reminded of America’s gun problem and the need for bipartisan gun legislation with the recent mass shootings in Buffalo, Uvalde, and Tulsa, which killed 35 people. Advance Carolina, and our sister organization North Carolina Black Alliance, call on President Biden and the Congress to confront the dual epidemics of racial hate crimes and gun violence plaguing our nation. We must honor the victims by working to overhaul the gun laws that have decimated too many American families and communities.

Like many Americans, we are sick and tired of being held hostage by a cabal of Republican senators who refuse to pass the commonsense gun reform legislation supported by a majority of Americans, and by a radical Republican right that continues to foment racial hatred and division via fringe conspiracies, such as the ‘great replacement theory.’ This election season, using gun reform as our mandate, we will campaign to rid our legislatures of elected officials who continue to obstruct the will of the American people by voting against gun reform and promoting rhetoric that endangers our safety and that of our democracy.

In Buffalo, New York, on May 14, 13 individuals shopping at a Tops supermarket were shot by an 18-year-old white supremacist gunman using an AR-15 semi-automatic weapon and shrouded in body armor.  Eleven of those shot were African American; 10 died, and the remaining victims were hospitalized. The shooter, who drove some 200 miles to seek out his victims, is believed to have written a 180–page manifesto professing his intent to target and kill Black people.

In Laguna Woods, California, the following day, a disgruntled Chinese American barricaded himself inside the Irvine Taiwanese Presbyterian Church and shot six Taiwanese Americans, one of whom died.

Following the racist-propelled slaughter in Buffalo and the Laguna Woods shooting, numerous politicians proffered prayers and condolences for the victims and their families. There were agonized calls for moments of silence, and self-serving admonitions from Republicans who warned Democratic legislators not to politicize the tragedies with calls for gun control.

Yet, a little over a week later Americans have borne witness to the slaughter of the most innocent among us—children—in what should be among the safest of places: school. In that shooting, several days ago, in Uvalde, Texas, the unspeakable happened when yet another hate-filled 18-year-old massacred 19 elementary school children and two teachers using an AR-15 while clothed in full body armor. (Click here for more on the victims of that tragic shooting.)

Why Is This Happening? 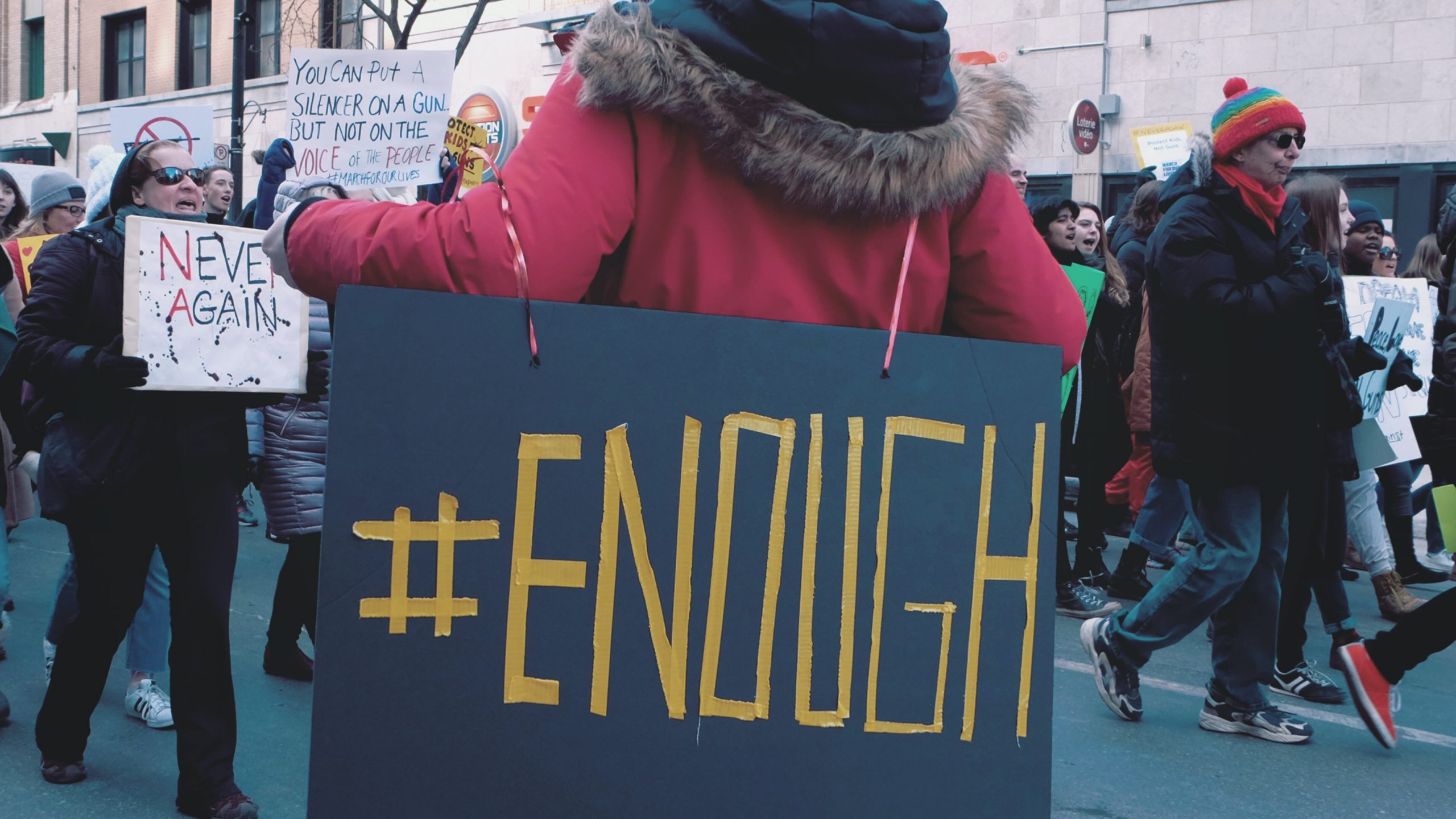 March for Our Lives Rally. Photo by Rux Centea on Unsplash

The answer is no secret, and the architects of this mushrooming culture of gun violence are identifiable. They are the ready access to semi-automatic weapons and the unflagging fidelity of the gurus of death—a Republican party whose wholehearted allegiance to the National Rifle Association (NRA), gun manufacturers and lobbyists—trumps every responsibility to the American people they were elected to serve.   (Click here for a list of Republican senators heavily supported by the NRA.)

The lethal combination of hatred and access to guns, including assault weapons, has blasted a path of destruction across our nation that links Americans of all backgrounds. Places as different as Buffalo, Laguna Woods, and Uvalde now share an asterisk next to their names, as the sites of hatred and mass murder committed within minutes by a lone gunman armed with military-style assault weapons and hatred in his bosom.

The shooting at Robb Elementary School in Uvalde marks the 27th school shooting of 2022. We are in the sixth month of the year. But quite likely the carnage won’t end there. This year, the number of mass shootings is projected to be double the number of days in the year, a disturbing but increasing trajectory over previous years.

Data from the Gun Violence Archive—an organization that collects gun violence data—shows that in 2019 there were 417 mass shootings, 2020 marked 611, 2021 saw 693, and as of May 26, this year, there have been 214. (Click here for a complete list of mass shootings to date.)  (A mass shooting is defined by that organization as any shooting in which four or more individuals are shot and killed, excluding the shooter.)

We are the only nation where this is happening.  Why, and what are we doing?

Like the rise in gun ownership and corresponding gun violence, hate crimes in the U.S. are growing.   The FBI’s 2020 Hate Crimes Statistics (HCS), released in August of last year, showed that racially motivated, and other hate crimes, have risen over the past several years.  Much of that hate has been fueled by a growing White nationalism that has itself been stoked by an increasingly extremist Republican party and members of the Far-Right media.

The 2020 HCS showed a 32% increase in racially or ethnically motivated bias crimes, with anti-Black hate crimes exhibiting a 49% increase over 2019, and anti-Asian hate crimes showing a 77% increase. (Click here for a breakdown of hate crimes statistics by race, ethnicity, and other demographic measures.)

Though shootings like the ones in Buffalo, Laguna Woods, and Uvalde rivet our nation’s attention, the truth is that “every day some 311 Americans are shot,” and a third of them die from gun violence, according to Brady United, a gun-violence prevention organization. In major cities like Chicago and Baltimore gun violence is an everyday occurrence. Across our nation, “twenty-two children and teens between ages 1-17 are shot every day; with five dying.” And, “Black males ages 15-34 are 20x more likely to be the victims of gun violence than their White counterparts.”

A Hard Look at the Numbers Associated with Gun Violence

Some 45, 222 Americans died from gun-related deaths in 2020—124 people per day, per the Centers for Disease Control and Prevention (CDC) records (Both homicides and suicides are included); and a Pew Research Center study found that the “19,384 gun murders that took place in 2020, showed … a 34% increase from the year before, a 49% increase over five years and a 75% increase over 10 years.”

(For further demographic breakdown of the number of Americans shot daily by race, age, gender, and other measures, click here to view the statistics from Brady United.   “A Year in Review: 2020 Gun Violence Deaths,” a study by  the Johns Hopkins Center for Gun Violence Solutions provides a more comprehensive analysis.)

To be clear, mass shootings have risen as the sale and proliferation of assault weapons have increased in our nation.  As discovered by Joshua Koskoff, the attorney for the families in the Sandy Hook massacre, the increase in the proliferation of the AR-15 is a direct result of a highly strategized marketing campaign by gun manufacturers aimed at making the purchase and ownership of assault weapons more attractive to a new generation of prospective gun owners. According to Koskoff’s findings, that targeted campaign began in early 2000s, around 2006, and Americans have been the unhappy recipients of its benefits, present in the mounting number of mass shooters using AR-15s as their weapons of choice.

In the days following Buffalo and Uvalde, a narrative of confusion and helplessness took place.  What can be done? The responsibility for the carnage is laid at the feet of mental illness.  But the fact is the mentally ill have always been with us, and other nations have mentally ill citizens but do not register mass shootings and extreme gun violence as a daily occurrence. 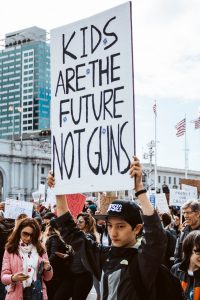 Photo by Natalie Chaney on Unsplash.

In fact, a look at gun laws across the country has shown that the states with the strongest gun laws report lower rates of gun violence. And countries that experienced mass shootings but strengthened their gun laws have also reported sharply decreased incidents of gun violence.

Under the Biden Administration, Democrats in the House have twice passed bills that call for the measures that would strengthen background checks and close loopholes in gun purchases, among other measures. In the past, the Republicans in the Senate have blocked the legislation. Recently, small steps have been taken as the framework put forth by 10 Democrats and 10 Republicans for the first bipartisan agreement on gun safety measures has taken shape. While this is progress toward meaningful gun legislation, it still falls significantly short of the package of gun measures passed almost along party lines.

The blood of gun violence victims rests on the shoulders of any obstructionist—Republican or Democrat—who stands in the way of gun reform legislation. Likewise, it rests on the shoulders of all Americans if we fail to do what is necessary. Couching the responsibility for the failure to pass effective gun reform in the language of diplomacy and evenhandedness does a disservice to those who died in Buffalo, Uvalde, Tulsa, and the many other victims of gun violence.

The 13 dead, and 20 wounded in Littleton, Colorado’s Columbine High School (1999) weren’t enough to break the NRA stranglehold over the Republican party. The sight of 20 small children and 6 adults massacred, and 2 others wounded at the Sandy Hook Elementary School in Newtown, Connecticut (2012) did not shake them. Neither did the killing of 9 African Americans during bible study in Charleston, North Carolina (2015), nor the murder of the 49 killed and 53 wounded at Pulse, a gay nightclub in Orlando, Florida in 2016.  The 60 killed and 411 wounded during an outdoor music festival near the Mandalay Bay Hotel in 2017 remained unconvincing; as did the 17 killed and 17 wounded at Stoneman Douglas High School in Parkland, Florida in 2018, and the 11 dead and 6 injured at the Tree of Life Synagogue in Pittsburgh (also 2018).

In the upcoming Mid-term elections this November, we must use the power of our vote as a mandate on gun control. Any candidate who refuses to fight for gun control measures must be defeated.

Advance Carolina commits to doing everything in our power to remove those obstructionist legislators who pledge their allegiance to the NRA and to the promulgation of racist conspiracy theories meant to divide Americans and undermine our democracy.

We commit to working to elect representatives dedicated to serving and protecting American voters by passing commonsense gun reform and confronting the growing domestic threat of white nationalism.

Commonsense gun reform must happen. That includes the requirement of universal background checks; a ban on assault weapons and high-capacity magazines; the passage of Red Flag, and safe storage laws.

Let us mark this Juneteenth as the turning point in the fight against the dual epidemics of gun violence and extremist hate crimes sweeping our nation. Our children and our communities are counting on us.